Working Toward Their First Flock 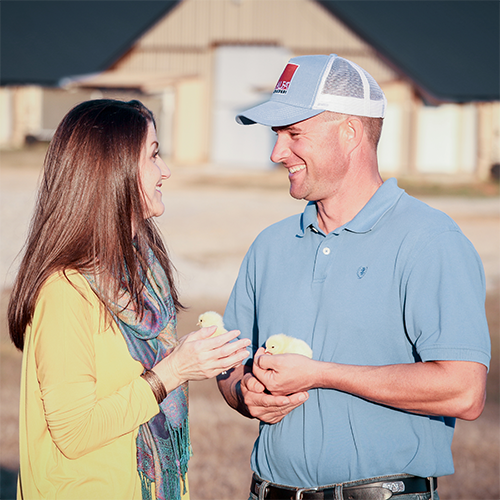 In 2015, a couple in Coffee County Alabama made a move that helped them achieve their goal of business ownership. With the construction of Wayne Farms’ new poultry feed mill in Ozark, Alabama, Josh and Jennifer Snellgrove decided to make a decision they’d been considering for years and start raising poultry.

The move to poultry farmers was a quick one for the Snellgroves. From the time they submitted an application to Wayne Farms to when they received their first flock of birds was just eight months. The bank employee and local utility company employee had much to learn about the business of raising poultry in that short time.

“Those eight months were a whirlwind of construction and learning all we could about the business,” said Jennifer. “But it was an awesome feeling when that first flock arrived.”

To prepare, Josh and Jennifer built four new poultry houses and consulted with friends who are also poultry farmers in the area. Alabama farmers raise more than one billion broilers each year and rank second in the nation in broiler production, behind Georgia. The business of poultry production is a major economic driver in the state.

“The freedom and responsibility of being my own boss is also what I find the most satisfying and rewarding,” said Josh. “You have to think of this as a business.”